Hello once again Chaos fanatics! Old Man Chaos is back after a couple of months with some newly painted stuff. I know I haven't posted in awhile but I have been working on some terrain when I have been able to- things are just so busy with the baby and all. I steal some time for modeling here and there as best as I can. 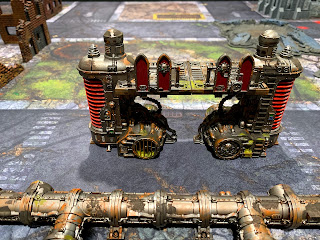 At any rate, I told you guys last time that I had been bitten by the terrain bug. I really want to create an entire table of Manufactorum-style terrain. An entire industrial sector to battle over. Last time I did the Sector Mechanicus building, which turned out pretty good- though I was dividing my hobby time between the Knight and that building. 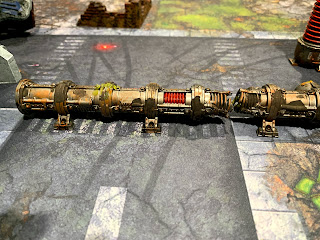 So now I'm back with some other painted up terrain. First up are my Plasma Conduits (AKA pipes) and Plasma Regulators. I used the same paint scheme as the rest of my pipes and mechanicus stuff. 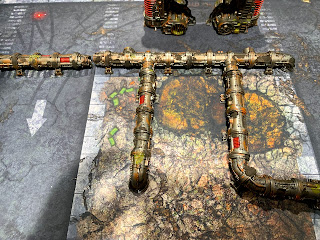 The metal is Leadbelcher, washed in Earthshade, with Ryza orange, Nurgle slime,  and Typhus Corrosion to add rust and other effects to the pipes. The red plasma is done with several red highlights followed up by the red gemstone technical paint, thus giving it a bright, energized effect. 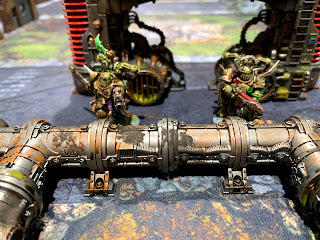 The Conduits (pipes) go with my other pipes, so I now have a huge pipeline if I want to. And the Regulators can go with the pipes, as can the Haemotropic Reactors. I really like how just about everything in the Mechanicus terrain line up goes together so well. 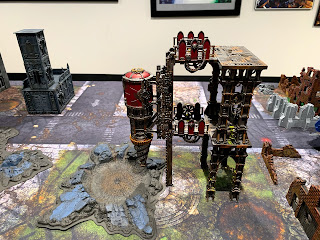 Speaking of going together well, I also completed what I consider to be my centerpiece mechanicus terrain, the Tectonic Fragdrill. I say go together well because the piece went together very easily. It is just two platforms on top of each other plus the drill rig, which was fairly straightforward (except trying to get the drill on the track but it didn't take too long). 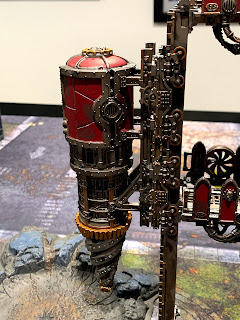 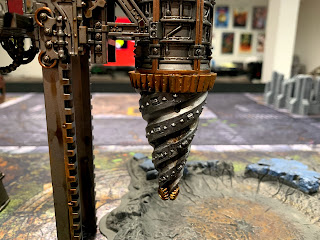 The metal sections are the same as I described above, except I put Necron Compound onto the drill itself, just to give it a little highlight. The armored surfaces I did Khnorne Red to match my other Mechanicus terrain pieces. 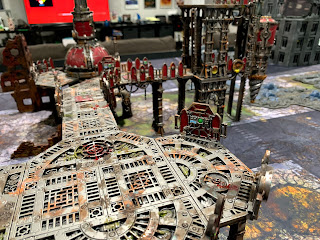 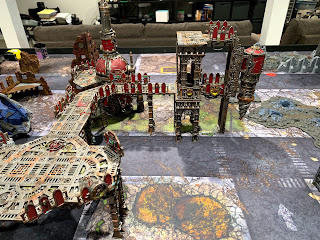 Putting the drill with my other mechanicus platforms, you can see how it all goes so nicely together.  If I had more platforms I could build quite a series of catwalks along with the drill. I probably won't go THAT nuts, but it is something for me to think about at some point. 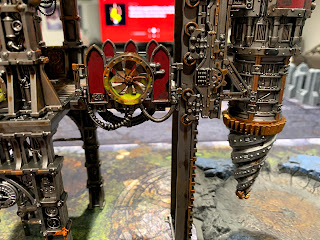 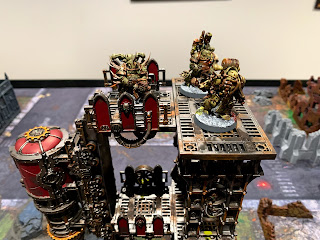 So that is all I have to say about that (thanks Forrest Gump). I still have one more thing of terrain I have to work on, then its onto some regular stuff again (Hello Lord Discordant and Abaddon).

Until next time...
Posted by Professor Chaos at 8:36 AM

Professor Chaos
My wife had the idea of doing a blog and suggested it might be a good idea for me to give it a try too. I felt that my blog should be fun, about things that I enjoy, rather than blogging about work, or current political problems (no promises on that last one though). So, I'll give this a shot, just blogging about my hobbies and such.